SSH private key can be encrypted with a user known password so it’s use is limited to the person knowing the decryption passphrase.

The internet is full of debates over what ssh key type is more secure, faster when it comes to encryption, decryption and signature marking/checking, but almost everyone agrees that RSA keys are safe whereas ECDSA are supposed to provide smaller key sizes at faster operations and similar degree of security as RSA and DSA crypto algorithms.
This article focuses on RSA key type, but before continuing make sure you read the part of man ssh-keygen if you are looking for FIPS compliancy:

The generation of the ssh keys is done. Few things to note here:
– Key length is set with the -b option.
– The public key will contains the chosen comment by the -C option.
– Type is RSA

Whether or not the private key is encrypted and the passphrase protecting it is entirely optional, but for higher security, it is recommended to set one and do not forget it. The entered passphrase is not shown on the terminal. En encrypted private key ensures that a potential loss of the key does not post an immediate threat to the systems using that key.

The destination directory of the keys is optional, but it is a good practice to generate them in home directory under the .ssh directory.

Now that both public and private keys are available, it is important to know that the private key is private and must only be in the possession of the legally appointed administrator. The public ssh key will be used on the destination Linux VPS servers that will accept the private key.

The easiest way to accomplish this is to copy the contents of the public key, login to destination Linux/Unix system and paste it in the authorized_keys under the .ssh directory by default. Once you have done so, save and exit the file.

Some SSH deployments will have Public key authentication disabled by default so you need to make sure that the following options are set to “yes” in /etc/ssh/sshd_config (or equivalent SSH daemon configuration file):

Depending on whether or not password authentication is still desired, the following options should be set to “yes” or “no”:

If regular users should be allowed to login via ssh using password, but root user should be disallowed to use it’s password, change the following line to:

Save, exit and restart/reload ssh so above changes to take effect and login securely.

With VPSie, you can add the SSH Public key in the web administration tool and new Linux based VPS servers will have the key added at creation time.
The image below provides a preview of this feature: 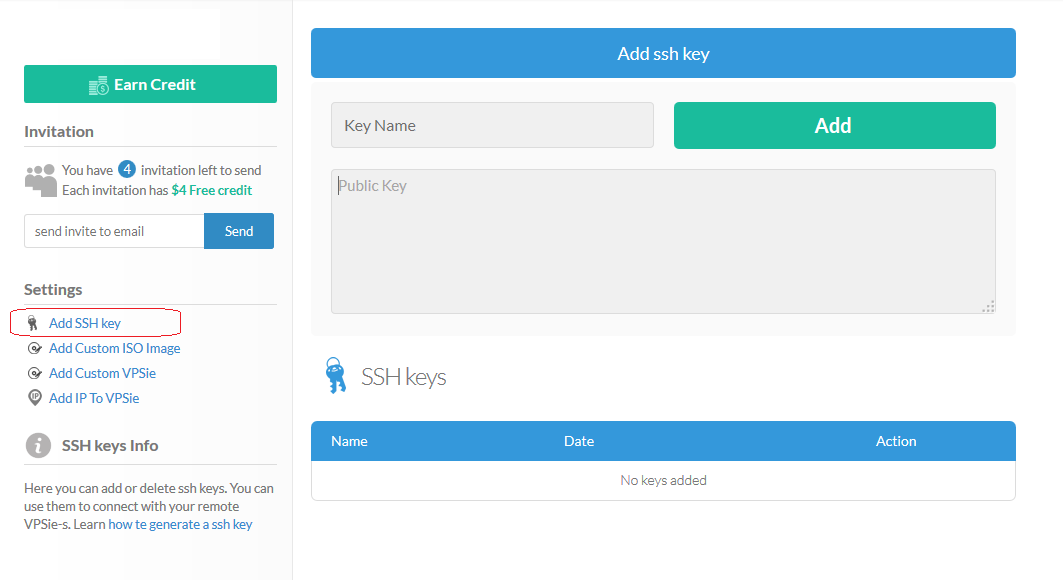 Try us free for one full month today!